All the Pretty Paintings

"So we go to this gallery—me, Marie, the kids—and it’s not only what I expect, it’s worse." 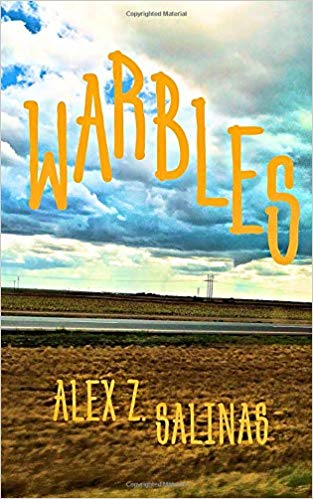 Warring Warbles Within — A Review of WARBLES by Alex Z. Salinas
by William O. Pate II

So we go to this gallery—me, Marie, the kids—and it’s not only what I expect, it’s worse. Awful, pointless, white. Everywhere white, the art and the crowd.

“Incredible,” says Marie, in her signature monotone, swiveling her head left then right, which means she approves.

“Dumb,” says Mikey, which means that in two minutes flat, he’ll beg us to take him to GameStop.

“Wow,” says Marie—I mean, Little Marie, or Mini-Me, I like to call her—swiveling her head left then right just like her mother, making the duo appear the girl version of Will Ferrell and Chris Kattan in Night at the Roxbury. You know the scene.

“Must be Mikey and me are the only two who don’t get it,” I say. With two women around constantly, I hesitate to make declarations. I prefer instead to pose perplexions. In the exchange of information with the fairer sex, the difference between declarations and perplexions is, I’ve learned, the difference between saying, for example, “You do look rather imposing in that dress, honey,” and, “Honey, no, of course you look incredible, but haven’t we both fallen off the fitness wagon?”

“Clearly, you don’t understand nuance,” says Mini-Me, raising her chin so high I spot a juicy little booger lodged in her nostril.

“I dunno,” says my son curtly. “Can we please go to GameStop please? This place sucks!”

“Michael, language,” I snap. “And no, we can’t go to GameStop yet. We barely just got here. We have to appreciate all the pretty paintings.”

Marie smiles at me tight-lipped and with eyes cold, black and hard like stones at the bottom of an old well. She squeezes my hand hard—hard enough—then ushers us, The Pack, toward the first canvas in sight.

Nothing’s on it. Nothing at all. I mean, it’s blank. Plain white pigment—the conglomeration of all color, says a snobbish voice inside my head. I don’t know who this voice is, this phantom Pierre Escargot, but I sure do hate his stinking guts.

The first not-painting is by a Mexican artist called Fabricio. Fabricio is standing next to his empty work, smiling tautly like Marie. He’s tall with a bushy reddish beard.

“Gracias,” says Fabricio, bowing knightly to her. He registers the rest of The Pack, grin revealing a row of untrustworthy gold-capped front teeth.

“What was your general approach on this piece, señor?” Marie asks him, all polite.

“Pos, no-thing craycee,” answers the slick Mexican, surrendering his hands to the air as if to proclaim, “It arrived to me as a gift from God, mi amor.”

“Pos, I jus listened to mi corazon,” he says to my wife.

“I can do that,” blurts Mikey, furrowing his face at Fabricio’s vacant canvas as if it had just squirted pickle juice on him.

The next not-painting is exactly like Fabricio’s except smaller—much smaller, about half the size of a square of tissue.

“Now this,” says Marie, monotonely. “Notice its diminutiveness. Small but aggressive. On the attack. I can feel it burrowing inside here,” she says, tapping the center of her chest.

This little gem was manufactured by a Californian called Ken Nguyen, who’s barely taller than my own Mikey.

“This is so stupid,” says my son. “Can we pleasepleaseplease leave already?”

“Ohmygod, shut up about your stupid videogames,” says Mini-Me.

“Mini-Me—Marie—not in front of the nice gentleman,” I say.

“No worries,” offers Ken Nguyen, bowing very Fabricio-like. What’s with all these guys bowing like fancy British butlers? It makes me feel inappropriate, unbecoming, as if I’d shown up late with my family to the wrong birthday party.

“Believe you me, we really do appreciate your work,” says Marie to Ken Nguyen. “The subject, the size, the composition—it belies man’s true nature. A violence so pressurized, so intense, it’s as dense as a skin-shearing neutron star.”

The next not-painting, if one can even call it that, is an entire section of white wall upon which, smack on its center, is the name Jamal Blackberry written in black cursive no longer than a foot across.

“Behold,” says the artist called Jamal in an accent I can’t place, his branch-like arm stretched toward the wall, I mean, his mural.

“Incredible,” says Marie. “The complete universe unto itself. Alpha and omega. The Word and Will of God, anchored by His Logos.”

“So, wouldn’t it be like really cool if I did this?” blurts Mini-Me, whipping out a Sharpie then scribble-scratching lines across Jamal’s John Hancock and replacing it with her own, dotting the “i” with a girly little heart.

Someone’s cellphone hits the cement floor loudly and we’re suddenly surrounded by a swarm of people, all white people—every one of them dressed in tweed jackets and pointing at us, The Pack, as though we’re warty witches or no-good goblins who’ve invaded their mighty little castle.

We’re corralled and pushed and shoved and spun around—then just like that the chaos stops.

We’re outside the gallery, where a light drizzle is falling, a cool breeze blowing.

We all look at each other, all of us stunned. Then, my family looks at me, and I shrug my shoulders. We walk back to our soccer-mom van in silence, all of us holding hands like a picture-perfect little unit.

On the way home, I finally break the silence.

“Yeah,” Mikey agrees. “Crowd-surfing was badass! I was basically like Drake!”

Marie glances at me, a warm matronly smile on her face.

After dinner—leftover spaghetti and meatballs—the kids go upstairs to get ready for bed and I help Marie with the dishes. I scrub a plate so meticulously it sparkles bright white under the kitchen light.

“Check it out,” I say to her, holding the plate up high. “My masterpiece.”

She examines the spotless ceramic, cupping her chin.

“It’s missing something, hon—panache, maybe, or moxie. The special stuff. Keep chipping away at it, grasshopper.”

Wearing a grin, she kisses me. Oh, she’s a handful, my wife. She can be straight-up vicious like a deadly little cottonmouth, but there’s something about her that always tickles my toesies.

The next morning, after Marie leaves to drop off Mikey at batting practice, it’s all over the local news. An installation by up-and-comer Jamal Blackberry sells for $1.3 million. The buyer, Chevy Chase Ford-Ferrari, a red-faced car dealership magnate, is shown chewing a fat Cuban cigar.

“Look!” I say to Mini-Me. “You’re what the hoodlums call Instafamous!”

“Eww, like don’t ever say ‘hoodlums’ again. And, ohmygod!”

My daughter and I land on discussing the finer points of copyright and intellectual property theft. Her knowledge amazes me and, after a while, I witness her face morph into a terrible older-looking mask I’ve never seen before, as if the thrill of her name appearing on television had expedited her entry into adulthood.

She asks out loud where her share of the pie is. Before my eyes, Little Marie, Mini-Me—my baby girl—threatens to call a lawyer.

“I’ll take that rich prick to court for every penny he’s worth if he thinks he can screw me over!” she yells.

“Now sweetie,” I say even softer, “we’ve plenty of time to plan your future. Let’s take things one little step at a time, okay?”

“You know when I set my mind to doing something, Daddy,” she says, meaty emphasis on my pet name, “I always see it through.”

Mini-Me struts upstairs like a vengeful cat on the prowl—I don’t know how else to describe it. It’s something I’ve watched her mother do too many times before. Too many times to count.

The darndest thing is, I can’t deny her claim: nothing fuels my baby girl more than good old-fashioned spite.

“You gonna take care of your momma and daddy when they’re old and brittle?” I ask the stairway sans my daughter. Goodness, I think, my life’s a Hallmark movie.

Out of curiosity—okay, and a teensy-weensy bit of dread—I pull out my phone and google Harvard Law tuition. What’s the harm in knowing, right?

I feel something hefty—dumbbell-like—slam down on my guts. I’m convinced it’s the leftovers. Rotten old pasta.

“Exactly like her mother,” I hear myself mutter, the hot residue of my words leaving my mouth sticky and fever-like.

Standing alone in my living room, the TV still on, I watch bands of sunlight breach through the white blinds and splash across my living room carpet. Every day, this happens without my consent. Then, for a few seconds, my cellphone buzzes on my sofa, also without my consent. Every day, at select times, I choose not to answer my calls. Then, for some reason—for no real good reason whatsoever, really—I bow. I bow to no one—except maybe to the ghosts I’ve always sensed loitering in my pantry, for I believe my house is haunted. And maybe to fathers and daughters and sons of noble mothers across the world. And to money in the bank and the bleeding spirit of America, that fickle bitch. And to decent health and hope that one day—someday—Jesus’ll grant me the strength to pay off my mortgage on my two-story, four-bedroom cookie-cutter home of plain, white, ugly walls.

The world-renowned Fabrico believes that art should speak for itself, thus he refused to provide any biographical details. He did say of this particular piece that it dates from the flashy early period before he embraced true minimalism.