The readable version of my publisher's note in SAR III. 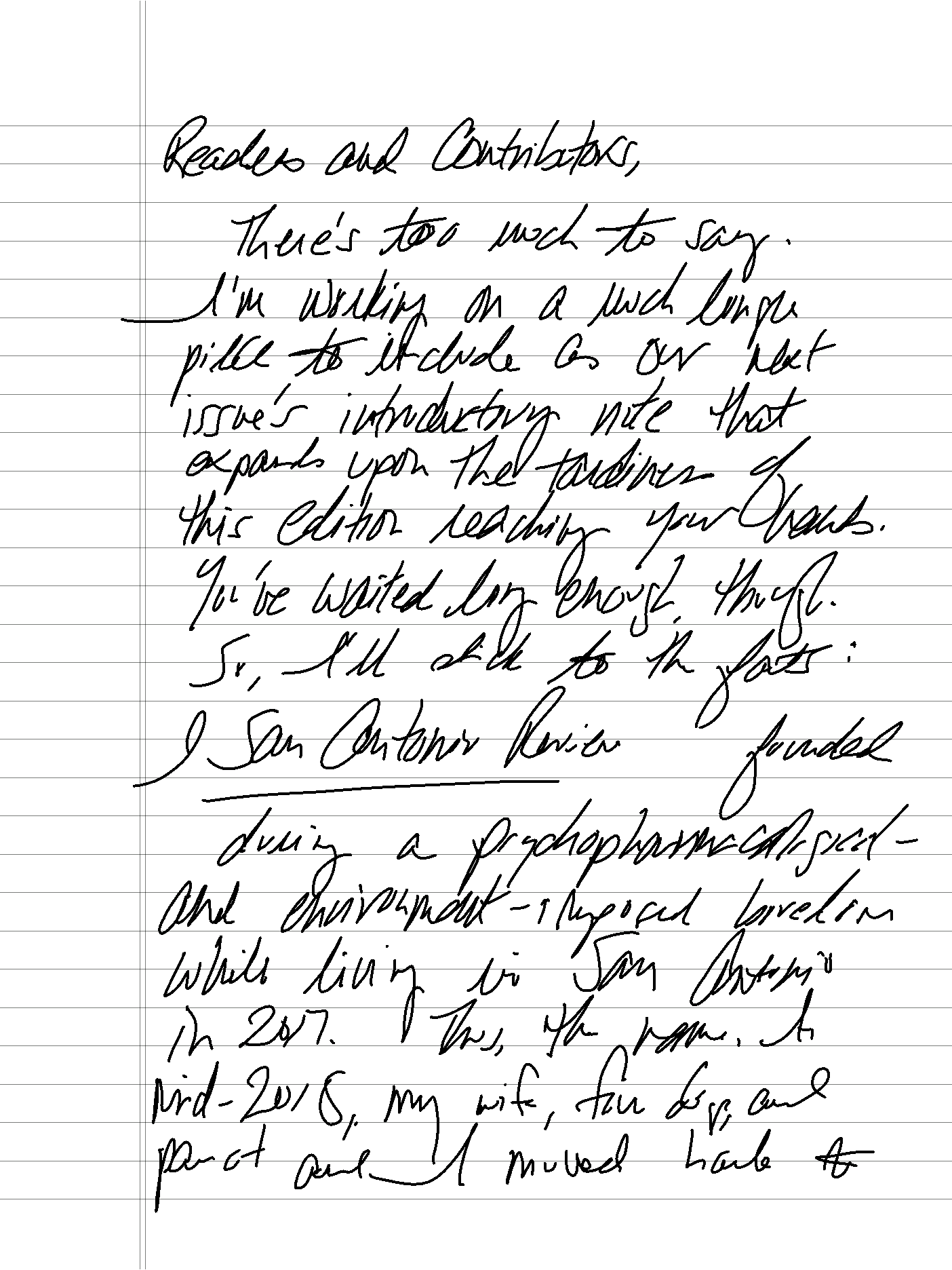 There’s too much to say.

I’m working on a much longer piece to include as our next issue’s introductory note that expands upon the tardiness of this edition reaching your hands. You’ve waited long enough, though. So, I’ll stick to the facts:

I founded San Antonio Review during a psychopharmaceutical- and environment-induced boredom while living in San Antonio in 2017. Thus, the name. In mid-2018, my wife, four dogs and parrot and I moved back to Austin. I considered renaming the journal, but was ultimately dissuaded by Gianna, our new poetry editor who takes over from Alex Z. Salinas, who is focusing on his own publications. (I am using the title I fell upon instead as the name of a new publishing imprint for book-length works of fiction and nonfiction: SPRINGpunkt.). That’s all to say that our name doesn’t reflect our location — nor does it reflect the work you’ll find in these pages and on our quite-lively and recently refreshed site (sareview.org). While we certainly are interested in elevating the voices of our namesake city’s artists and authors, as an international journal, we in no way limit ourselves to publishing writers or artists hailing from a specific location. In fact, now that Alex has drifted away, no current member of our editorial collective resides in San Antonio. Gianna, whose hometown is closest, is studying in Czechia. But the cultural, ethnical, racial, national and other intersections apparent in San Antonio’s population we do hope to better reflect in our pages. This is a continuing journal that demands the effort of thoughtful consideration as to how — and how well — we accomplish that goal.

You’ll notice two new names on this issue’s masthead: Paul Peterson and Peter Berard. I met Paul at Epoch Coffee on North Loop in Austin about ten years ago. When I threatened to shut SAR down earlier this year due to overwork and time constraints, he offered to help out. He now regularly handles our weekly digital publication. He’s the one to ask for publication dates and to complain to if there’s a typo introduced into your digital pieces. His help is also responsible for keeping SAR alive when I was pretty certain I’d finished with it. Instead, I’ve invested more time, effort and money by moving us to the new MIT Media Lab-birthed and recently independent online publishing platform, PubPub.

Run by the folks at Knowledge Futures Group, PubPub matched my desire for a platform dedicated to open-access scholarship, users’ privacy, and collaboration with partners. PubPub has given SAR unique capabilities we sorely lacked, including an all-in-one submission, review and publication system; the ability to issue DOIs to authors for their published pieces; annotation abilities and more. Further, it removes the necessity of me (or Paul) maintaining the backend capabilities of the platform by cobbling together various widgets and third-party extensions to provide the rather basic functionality required to run this journal. Thus, the capabilities are built-in and far more secure than I, in my limited technical knowledge, could provide.

I stumbled upon (a constant refrain from me) Peter Berard’s reviews while reading comments on Goodreads a long while back. I’ve long enjoyed reading his work on his blog, Too Much Berard, and publishing some on our site. I’m very happy he agreed to join our editorial collective as our inaugural book review editor. I’m also excited to present in this issue — as one of several treats Ive added in recompense for your wait — Peter’s review of Dr. Margaret Hagerman’s White Kids, recently released in paperback from NYU Press. I suggested he read and review it, as I’ve suggested to many others they should read it. Petere and Maggie are two writers I look forward to reading more from and sharing. Indeed, our next print issue will include an essay by Maggie relating her research to our current mid-2020 conjuncture.

I was informed by the Directory of Open Access Journals (doaj.org) that SAR seems to be more of a magazine than an academic journal with rigorous peer review. I suppose that’s partly correct. As usual, it depends on one’s definitions, I guess. But, if the DOAJ is limited to academic journals, SAR by intention wouldn’t fit.

San Antonio Review, as a venture self-funded from my own pocketbook (“disposable” income from my day jobs) and led, maintained and renewed by an all-volunteer editorial collective (most of whom have never published in its pages), it is meant to serve as a digital and print gathering space for the global commons. It invites work — artististic, written, musical, scholarly, whatever — from anyone seeking to share in building an emancipatory, just and respectful collective future. While we invite — and I can admit to being guilty in pursuing — the often thoughtful and thought-provoking submissions of academics, it would incorrectly narrow our adueince (of readers and submitters) were we to be listed in a misnamed directory.

I’ll close with a brief debate that occurred shortly after Paul joined the collective. Speaking on behalf of all of us who have eagerly awaited this print edition, Paul argued that he felt the print edition is what gives us legitimacy. I would argue that whatever legitimacy we have gained over the past three years is due to the excellent submissions ew’ve always received, the openness to change and experimentation many of the artists we work with are willing to approach their work and the growing community of support visible online and wherever you see a copy of this journal.